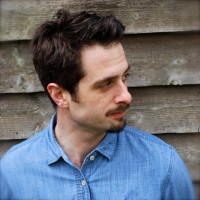 Our adventure finally kicked off after what was beginning to feel like interminable preparation. The family staggered into a taxi bound for Heathrow at 3AM beginning our long journey to Peru. Our dog gave us a half-hearted, sleepy send off as we locked the front door for the last time in 2019. (Don’t worry, the dog’s caretakers would arrive in just a few hours)

Just after 6AM, our first flight to Amsterdam took off and we had a few hours of layover in Schiphol airport before we began the 11 1/2 hour flight to Lima. Our arrival and immigration checks at Lima airport were uneventful and by the time we would check into our digs in Miraflores, we would have been travelling just under 24 hours.

The taxi from the airport, through Lima, was standard Peruvian fare, which by US and UK standards was a white-knuckle adrenaline fueled journey of terror. Peruvian drivers use horns and bumpers as a form of non-stop self-expression and they perform an intimate dance with other motorists and nonchalant pedestrians at breakneck speed. Despite the excitement, our kids slept blissfully in the back of the cab while we hurtled through a kaleidoscope of neon advertising Chifas (the ubiquitous Chinese restaurants), Karaoke joints, hair salons and neighbourhood tiendas.

With stellar behaviour throughout the whole journey, arrival in the hostel couldn’t raise the kids either. As we checked in and got keys from the rusty old VW Bug that served as the Selina reception desk, our youngest was curled up asleep on a North Face duffel, her little beat-up Blundstones spilling out into passing backpacker traffic.

The city we awoke to was everything we were hoping and planning for. I’d chosen a tricked-out hostel in Miraflores, a main tourist area close to the beach. With affluence, style and a Pacific coast vibe, Miraflores is to Lima, what Santa Monica is to the dusty sprawl of LA. 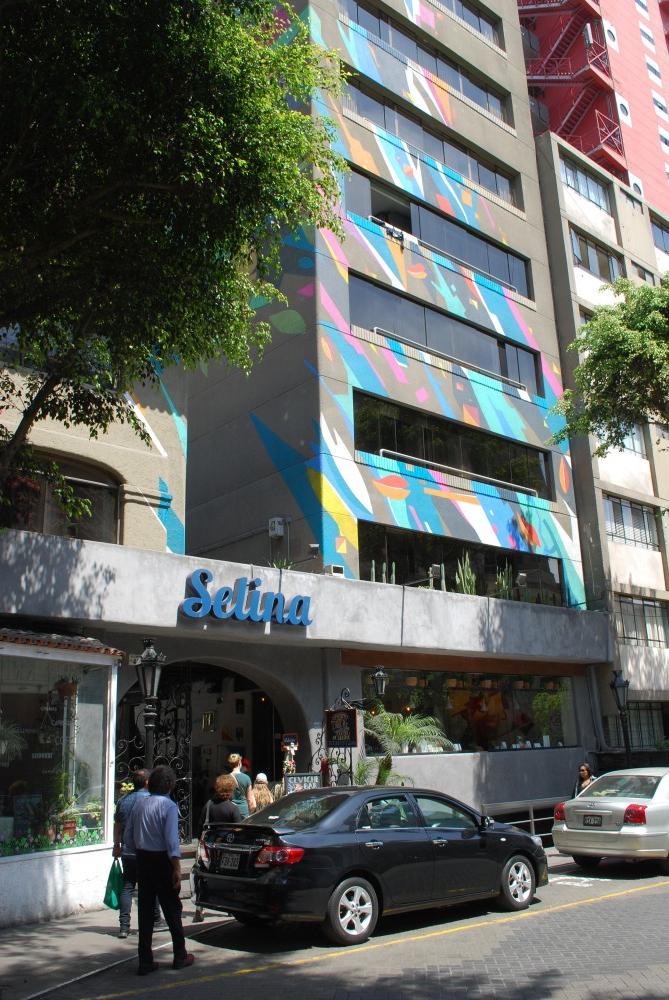 The Selina Miraflores is something of a luxury backpacker stay that I’d found via Hostelworld. Operated by a youth-oriented travel group, a bit like a backpacker Soho House, the hotel is a mix of bunk rooms and private rooms with the amenities and vibe reminiscent of a weWork co-working space. Breakfast features Avocado Toast. True. Fact. 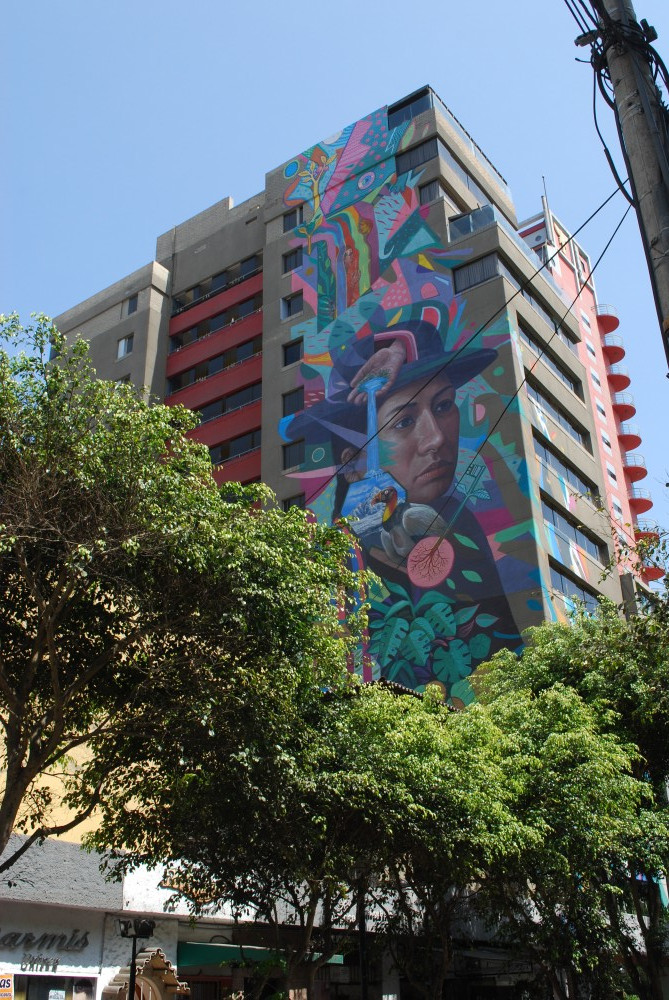 They’ve taken what was probably a very ordinary mid-range hotel and they’ve rubbed a load of funk up on it. There’s loads of simple, trendy decor and every wall in the place sports a mural or piece of street art. Its a hipster vibe that might not appeal to some but it was the right balance for us of good-value, cool style and a gentle transition between the familiar trappings of home and more modest accommodation that would come later in our trip.

Fun in the sun

We could have explored Lima for weeks or months and later in the trip, our youngest would express homesickness by wanting to return to Lima. But we only intended to use Lima as a landing point on our way inland to the Andean highlands, so we only gave it two days. In hindsight we sold ourselves short, because we loved wandering the streets and seeing the cool collision of colonial history and modern New World flair. 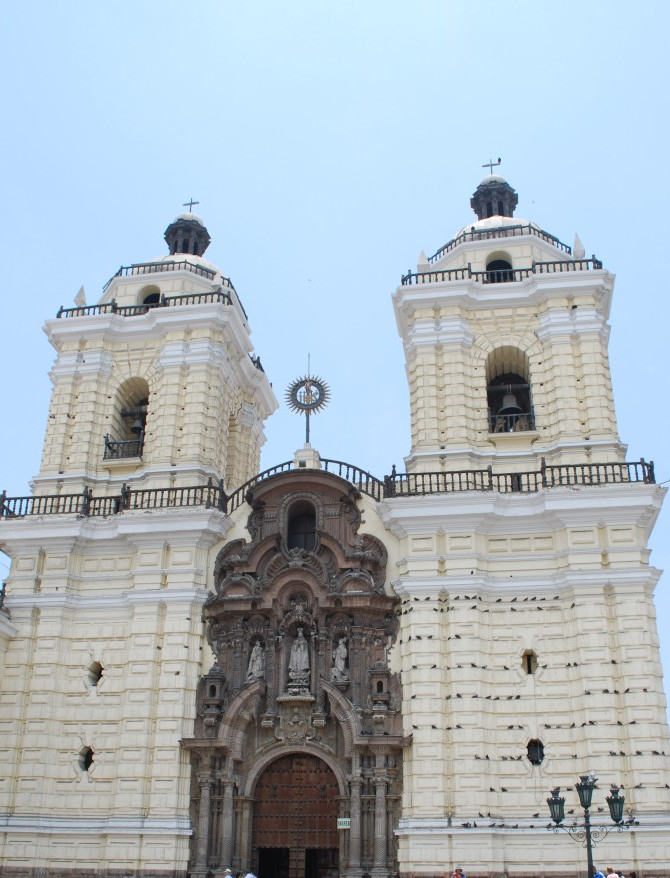 Our first day in the city was pretty much as we expected: a decompression day to find our feet, keeping close to the hotel, sampling some good food and warm weather and the expected amount of tension and miscommunication as we remembered how to travel together in a foreign place. We got set up with a Peruvian SIM card for our mobiles at Bitel and found our bearings before seeking the sea.

Miraflores towers above pebbly Pacific beaches on massive cobbled sea-cliffs. The long wander down the hill and the plentiful tsunami warnings were a reminder of how seismic upheaval and the rhythm of the ocean have sculpted the physical and cultural shape of the city.

Neither the kids, nor I, can stay dry on a beach. Sliding our pale British bodies into the surf at Makaha Beach, the water was just warm enough for us to play in and just brisk enough to help us fight the jet lag. The five hour time difference wasn’t as punishing as the long flights had been and the intense sunshine and sea air helped us reset quickly.

That night was Halloween and after a tourist market crawl, we hunted for supper, threading through hordes of zombies in Kennedy Park. The kids of the city had stared their Halloween invasion, visiting each store and shop on the commercial street. We saw familiar princesses and super heroes as well as a few masked, armed and red-jumpsuited gangsters from the Netflix series Money Heist (La Casa del Papel).

On day two, we ventured a little further from our digs, taking the excellent Metropolitano bus service into Lima Central. We walked the old colonial streets and marvelled at the ornate bay windows.

But the highlight of the walk was a visit to the Church and Convent of San Francisco of Lima. The monastery advertises itself on the merits of its well-preserved catacombs, but the real highlight of the tour is the monastery itself. Richly adorned with artwork and architectural splendour, the monastery is a wonder of detail that tells the story of Spanish colonisation, with a mix of Christian belief, Moorish influence and New world discoveries. The walls are covered in arabesques of tile-work and the carved cedar furnishings were intricate and Baroque. One dome above a rising staircase was a constellation of tessellated and boxed cedar stars.

Like many Peruvian attractions, photography isn’t permitted within the monastery, so its worth seeing for yourself when you’re in Lima.

Then we hit the beach again for a cool off before splitting into an introverts gang at the digs and a extroverts excursion to the vibrant Magic Water Circuit back in the city. By all accounts we introverts missed out on colourful, wet fun and good street food.

We’d slept, we’d wandered, we’d swum and we’d eaten. Eating may have been the highlight.

Lima is renowned for being a city of food, with traditional dishes and modern fusion cuisine. We sampled everything from street food to family restaurant fare to stylish snacks in our digs. Nothing disappointed. Just as seasonal food in the UK is turning monochrome and vegetables are becoming hard and flavourless, it was refreshing to see bright food and experience zingy flavours. Everything we ate in Lima was simple and savoury and came with bright tomatoes, fresh veggies and sharp flavours.

The unsung heros of Lima’s cuisine are the piles of tangy marinated onions, called Salsa Criolla that accompany everything. We had them with Tacos at Chinga tu Taco (A meal for four for S/117 - £27), and Chiccarones, an indulgent crackling pork, in towering sandwiches at Sangucheria El Chinito (S/90 = £21 for four).

Thoughts as we move on

Already, family lessons are plentiful while we figure out how to live on the road. Fitting in math lessons at the airport is proving easy, while balancing everyone’s needs and timing everyone’s hunger is trickier.

It’s especially easy to forget the needs of the smallest members of the group. The path of least resistance, but perhaps the most grumbling, is to just drag around small kids with no regard for their interests. But I’m trying to remember that this is their trip too and they don’t have a choice about being here in the first place. So they sure deserve some say in how they spend their time. Staying mindful of my kids’ energy and enthusiasm is a good way to keep from overextending my own.

Besides, fuelling a kid’s curiosity is the surest way to reawaken your own.

Up next: The Sacred Valley

Next week we travel the Sacred Valley, exploring Incan heritage in Pisac and following the footsteps of Hiram Bingham to the spectacular heights of Machu Picchu.

While we were preparing for this big Latin American Adventure, I aspired to travel as lightly as possible. I knew we’d be in and out of taxis, trucks and hi...